Geared Up has grown up and gone to middle school 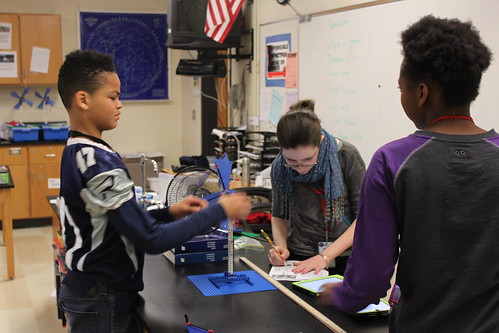 Picture fans blowing and LEGO windmills lined up like a mini wind farm and you have an idea of what 7th-grade Julian classrooms looked like recently. Guest speaker Gretchen Junker first gave the science students a brief history lesson on windmills. Next the students looked at modern wind turbines. They learned that systems for generating electricity — either through wind, hydro electric, geothermal, burning coal, or nuclear — are all similar. These systems all use turbines (moved by steam, wind, water) to spin an axle inside a generator and produce electricity.

The students then got building! They worked in groups of 2-3 to construct windmills using Geared Up LEGO kits. They were asked to test the impact of changing the number of turbine blades as their first variable. They learned about the importance of only testing one variable at a time. Then the students were free to choose and test their own variables, like turbine blade size, distance from the fan, angle to the fan, different gear ratios, different loads, and shape of the turbine blade. Students designed these tests and recorded their results.

Geared Up LEGO Engineering has historically been delivered primarily in the District’s 3rd-grade classrooms to help students study simple machines. As Geared Up program coordinator Gretchen Junker watched her own children move through the middle school, she realized that Geared Up LEGOs could help kids get more hands-on with middle school science concepts as well. The Julian science teachers agreed to pilot using the windmills in this unit of study. Brooks science teachers also piloted using LEGOs with simple machines, focusing on testing the impact of changing variables in the mathematical formulas for work and other concepts.

Said Julian teacher Ms. Chang, “The windmill project was a fabulous interactive inquiry. The students were totally engaged in building the windmills, identifying variables they would like to change, and then measuring the impact of that change. We hope to do more in the future.”