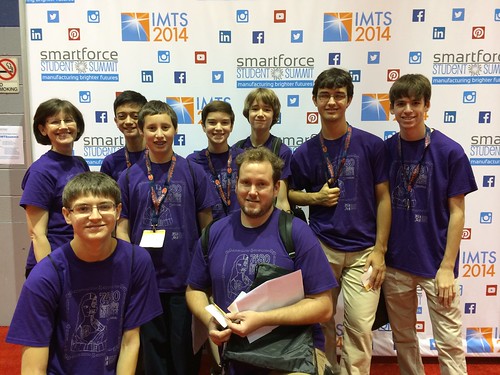 The Smartforce Student Summit is a special section of the IMTS designed to expose students to manufacturing technology. The four members of the Gold Rush Team, their coach and high school mentors were allowed to take the day off from school and head to McCormick Place on Tuesday, September 9, to demonstrate their robot and explain their design at the PLTW booth. The students have created a holonomic robot. This robot is designed to allow movement in any direction. It can rotate on the spot and even move while rotating, much like a crab.

Among the people who stopped by to check out their work were Autodesk representatives who were clearly impressed at how the students had used the Autodesk Inventor 3D mechanical design program to design their robot before building it.

The adults rotated the students in the booth, so they could explore the many other exhibits at the conference. This included an exhibit where a 3D printer was being used to build a car. Plans were to drive the car off the exhibit floor at the end of the conference!

The students were able to see how their VEX Robotics skills translate to occupations in manufacturing and engineering. It also gave them valuable public speaking experience.

“Attending the IMTS really opened my eyes about the world of manufacturing and all the cool technology. I’m grateful to OPEF, my fellow teammates, my mentors, and especially Mr. Walsh for making it possible for our team to attend and represent PLTW,” said team member Emet Sensat.

Thanks so much to Todd Fitzgerald and the staff at Percy Julian for allowing these students this great opportunity!