It was anything but a typical school day for a group of enthusiastic Irving Elementary students, who ventured to Rush University Medical Center this week to construct prosthetic hands and poke their fingers though the aorta of dissected sheep hearts.

Susan Tresselt’s second graders and Lauren Kaunelis’ third graders, along with a group of parent chaperones, experimented with two very different kinds of science lessons during the action-packed field trip.

One stop was at the Motion Analysis Laboratory, where they learned about body movement with the use of motion sensors. Kids walked, jumped and stomped – all while observing the velocity of their movements on a big screen.

The lesson, which incorporated aspects of physics and engineering, also gave students a new understanding of prosthetics with the opportunity to design and build a hand out of construction paper, straws, tape and ribbon. The students chattered excitedly with classmates and showed off the hands they created, pulling on the ribbons to simulate the lifelike movement of a real hand. Several students said they planned to keep working on the project at home, adding a prosthetic arm to the hand they created. 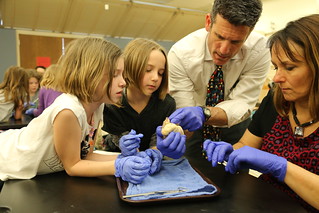 After creating hands, it was time to explore the inner workings of the heart.  The students walked over to a dissection lab and were greeted by Science Alliance scientist (and Irving dad) Christopher Ferrigno, who explained the function of various parts of the heart. The students examined those parts closely after donning blue gloves and probing and scissoring through various dissected parts of a sheep heart. Some students were more excited than others when it came to actually handling the heart, but they all were deeply engaged and curious throughout the lessons.

“I want to be the kind of doctor who always does this,” gushed one second grader.

The field trip is just one way that OPEF’s Science Alliance brings real-life learning to Oak Park students, giving them the opportunity to experiment and explore alongside experts in scientific fields. This hands-on enrichment engages them in science in brand new ways and introduces them to fascinating professionals from our community who use science every day in their work and their lives.

The OPEF-sponsored field trip also was covered by a reporter from the Chicago Tribune/Oak Leaves. Read the story here.