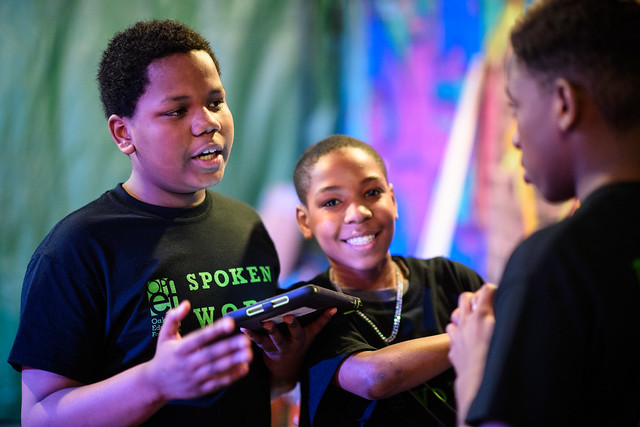 Who am I? That is a question central to every middle schooler’s search for identity. Before a rapt and supportive audience of peers, family members, coaches, and mentors, OPEF Spoken Word club members from Brooks and Julian middle schools performed their own poems at the season-culminating Respect the Mic poetry slam.

“The Slam was great! I was very impressed with this program,” enthused Dr. Valeriy Shafiro, parent of a Spoken Word club participant. “It is really a great way for kids to find their voice.”

Newly launched in October 2015, the OPEF Spoken Word program has two components: all D97 7th-grade language arts student participate in a week-long in-class residency with a teaching poet; and all interested middle schoolers are invited to participate in an extracurricular Spoken Word club.

Spoken Word program coordinator, Anne McNamee-Keels was especially pleased by the partnerships that formed between the teaching artists and the teachers, “There were six teachers, and each artist/teacher partnership looked different, with each pair tailoring the program to fit in the teacher’s unit plan.”

The residencies were followed by an in-school poetry showcase in each middle school. Julian Principal Dr. Fitzgerald reported, “”Some students who are typically quiet and reserved got up on stage and performed their poems in front of the entire 7th-grade class. It is clear that the opportunity provided by the Spoken Word program resulted in high levels of student engagement.” This broad participation was exciting. In addition to building literacy and communication skills, an important goal of the program is to engage all kids, including those on the social or academic margins, by examining topics relevant to kids’ experience.

The Spoken Word club launched in early 2016, providing a workshop environment for those kids wanting to go deeper with writing and performing poetry. Supported by the school’s visiting poet, two teacher coaches, and 2-3 high school mentors, each school’s club gave kids the opportunity to go from knowing very little about spoken word, to writing and performing their own poems.

As Julian teacher and Spoken Word coach John Colucci said, “Students opened up about all sorts of things and were supportive of one another in the best kind of way. One student left [the club] and said, ‘I wish every day could start like this.’”

Club members also connected to the larger Spoken Word community through their high school mentors, trips to see the high school’s club in action, and a train ride into Chicago to see Oak Park and River Forest High School students perform in the quarter-finals at Louder Than a Bomb, the world’s largest youth poetry slam.

McNamee-Keels is already planning for the second year of the program in 2016-17, “I would like to get more kids involved in the clubs, and start them earlier next year. This timing would allow the in-class residences and the club to overlap so kids can be doing Spoken Word in their classroom and the same day attend a club meeting and dive deeper.” She is also planning to send kids to compete at a local youth poetry slam, like Louder than a Bomb or Half-Pint Poetics, and get more parents involved in the program.

She said, “I’m so grateful to our coaches and teaching artists…it’s impressive how much they have accomplished in such a short amount of time, reaching 700 kids this year. Next year will be even better!”

As one club member said, “Please keep doing this [club]. It really helped me and I know it will help others, too.”

Thanks to all the people who made this year a great success:

And the people who helped make the Respect the Mic Poetry Slam possible: