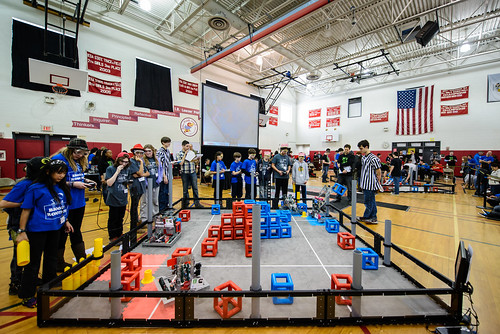 On Saturday, February 7, over 300 spectators rocked the stands as 170 young engineers from throughout the region went head-to-head at the OPEF 2015 Battle of the Bots. This year’s tournament included teams from Chicago, Berwyn, Elmwood Park, Elmhurst and of course Oak Park. Teams competed against each other on a 12-by-12-foot playing field by driving robots they designed, built and programmed in the VEX Robotics challenge game, Skyrise.

We were also honored to have Senator Don Harmon join us to present trophies and congratulate the teams. Four teams from OPEF VEX Robotics qualified for the Illinois VEX Robotics State Championship at the Battle of the Bots. They are:

These teams will next head to Batavia on March 8th to go up against middle school and high school teams from throughout the state.

See the full results of the competition here. Also check out the 2015 Battle of the Bots slideshow with photos by Paul Goyette and Kristi Braun.