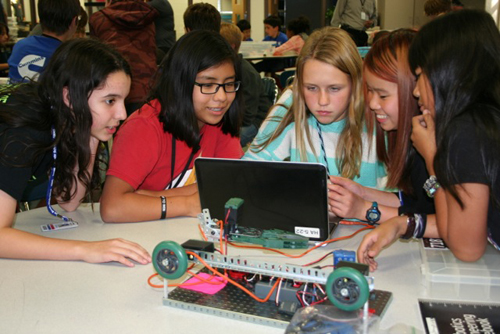 Ready. Set. Grow! This year 124 students were selected to participate in the VEX Robotics after-school club, up from 97 last year. Encouragingly, 28% of the participants will be girls, up from 18% last year. This increase is particularly exciting given national trends that show women significantly lagging men in graduating college in STEM-related fields.

The program coordinator, Mary Beth Hausken, credits the overall club growth to more District 97 students being exposed to engineering with this year’s launch of the Robotics class for 7th graders at Brooks and Julian middle schools. The increased number of girls can also be attributed to the popular Robotics Workshop for Girls held in the Spring, and the greater number of female coaches.

The OPEF VEX Robotics teams began meeting the first week of October. Their season will culminate on Saturday, February 7, at the OPEF 2015 Battle of the Bots, when students from Brooks and Julian will pit their robots against teams from throughout the Chicago area for the chance to qualify for the VEX Robotics State Championship.